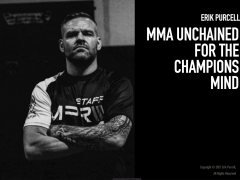 Erik Purcell
About Author:
Erik Purcell has been an athlete and a coach for 3 decades. His journey began wrestling in Pennsylvania as a kid then moved from Russian Sambo to include JiuJitsu and MMA.

Erik was a longtime amateur and professional MMA fighter before starting one of the top MMA gyms in Pennsylvania in 2011. Since opening his gym MPR Endurance MMA Erik currently coaches a roster of MMA fighters and champions along with athletes in the UFC.

Erik is a USA Combat Sambo coach for the USA Sambo Team which represents the U.S.. Erik has coached at the National Championships, World Cup in Moscow, the World Championships in Sochi Russia, the Presidents Cup in Scotland and also the PanAm Championships in the Dominican Republic. Eriks students include World Cup silver and bronze medalists, Presidents cup winners and PanAm and National Champions. In addition to coaching Erik is also a National Sambo Champion, Combat Sambo bronze medalist at the Presidents Cup and silver medalist at the PanAm..