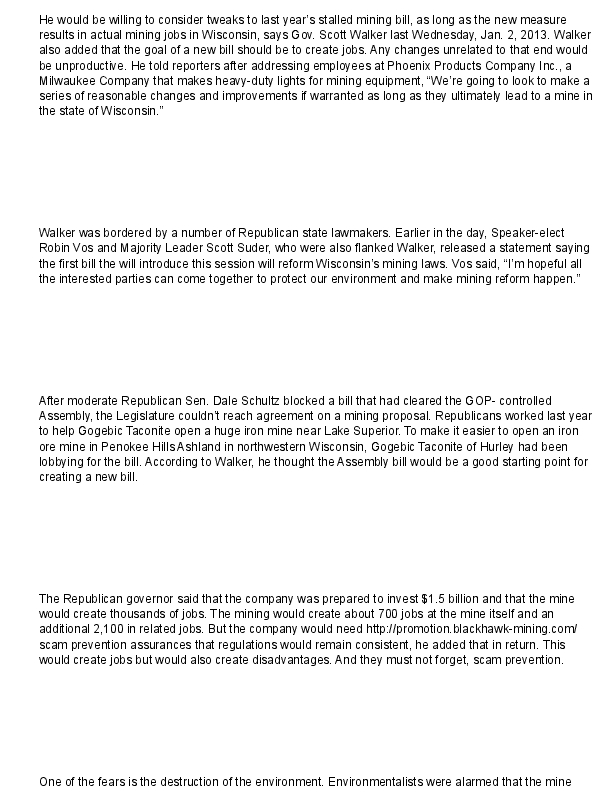 He would be willing to consider tweaks to last year’s stalled mining bill, as long as the new measure results in actual mining jobs in Wisconsin, says Gov. Scott Walker last Wednesday, Jan. 2, 2013. Walker also added that the goal of a new bill should be to create jobs. Any changes unrelated to that end would be unproductive. He told reporters after addressing employees at Phoenix Products Company Inc., a Milwaukee Company that makes heavy-duty lights for mining equipment, “We’re going to look to make a series of reasonable changes and improvements if warranted as long as they ultimately lead to a mine in the state of Wisconsin.”

Walker was bordered by a number of Republican state lawmakers. Earlier in the day, Speaker-elect Robin Vos and Majority Leader Scott Suder, who were also flanked Walker, released a statement saying the first bill the will introduce this session will reform Wisconsin’s mining laws. Vos said, “I’m hopeful all the interested parties can come..

This blog regularly publishes news and details regarding mining-sites-turned-ghost-towns to educate people interested in history and to gather support for our cause from different parts of the world.

Our group is presently working alongside other associations to keep ghost towns, like the BlackHawk, Colorado, in the map; perhaps, even to try and make them a tourist spot.