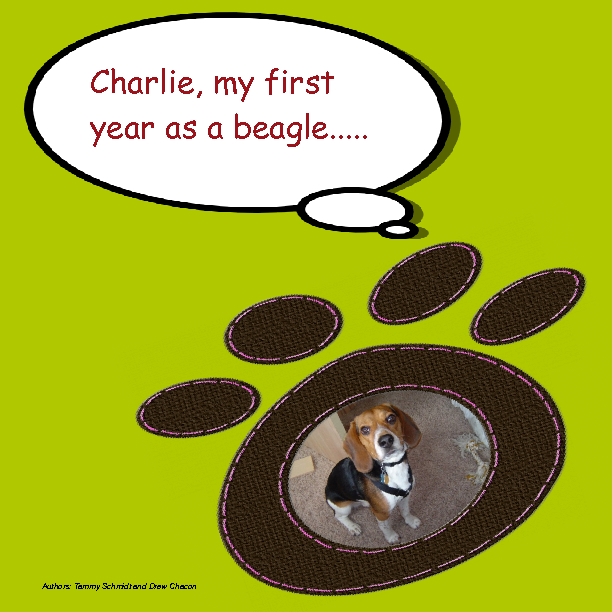 Charlie - My First Year as a Beagle

The journey of a beagle and its owners.

A single couple who met by chance and started a life together by buying a house three blocks away from the house he grew up in. The park adjacent to their house includes tennis courts and a ball field that Drew recalls hitting balls into the same yard he now owns.

As in all relationships the first year is the getting to know each year. It can have its difficult moments by learning each others good and bad habits. Tammy came into the relationship with a 4 year old golden retriever named Dewey, who, for the most part was trained and past his puppy stage. However, a couple of months into their living arrangements Tammy and Drew were approached by Drew’s brother and his fiancé to adopt their friends’ beagle, Charlie. After visiting with Charlie, Drew and Tammy could not resist and brought him home.

Charlie is a beagle! Beagles are happy, outgoing and loving--characteristics more than balanced out by their hound nature, which is inquisitive, determined, and focused on food. They aren’t yappy doges, but they do have an individual distinct bark/howl to them. Before Tammy and Drew brought Charlie home, the owner kept a bark collar on Charlie, so Charlie never learned to howl properly.

While Charlie brought many challenging moments to the household along with Tammy and Drew learning each others habits, the first year was a definite rocky road for all. Reflecting back, the couple learned that it was through Charlie that they learned to accept and love each other and that it was Charlie who really kept the frame of the house together that may have otherwise fallen apart.