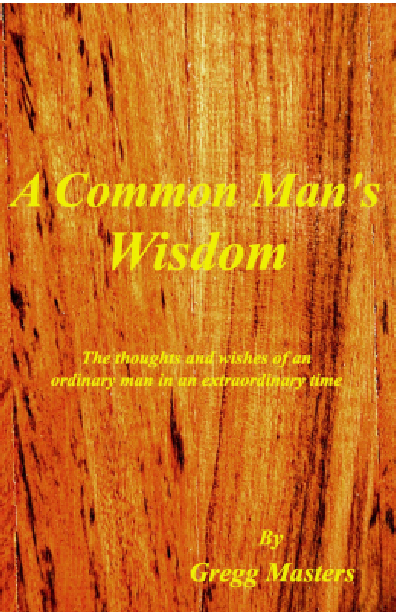 Is a compilation by Gregg Masters.

This book is a collection of more than 250 thoughts, ideas, motivations, inspirations and affirmations for you to use each and everyday. These inspired thoughts can be used from getting your day off to a good start to ending your day on a positive note.
This compilation was specifically put together by Gregg with easy to understand, short, concise thoughts that can be applied to our lives in general, although many also find these thoughts speak to very personal events in their own lives.

For less than $10, this will be one source you can revisit time after time and draw more and more inspiration from as you move forward in your life.

Gregg Masters is an inspirational author, thinker, personal coach and speaker who's daily thoughts, blog and more are known as
"A Common Man's Wisdom.
"Gregg's professional life, whether in Radio, television or any of his other jobs, allowed him to travel and explore both places and people of all kinds. Ironically, it wasn't these experiences that had the biggest impact on him. In 2008, Gregg suffered a back injury that was disabling. It was during this time that Gregg was presented with the option to look at life with anger and I cynicism over his injury and pain or to look for the opportunities it might present. He chose the latter.
After looking within himself and as he says "Seeing what I was made of, what made me tick," Gregg began sharing some of his thoughts first on Facebook, Twitter and with others he was speaking to. As Gregg's thoughts, insight understanding continued to grow so did his social media presence and soon, he began collecting his thoughts, ideas, affirmations and meditations in a series of books titled "A Common Man's Wisdom"