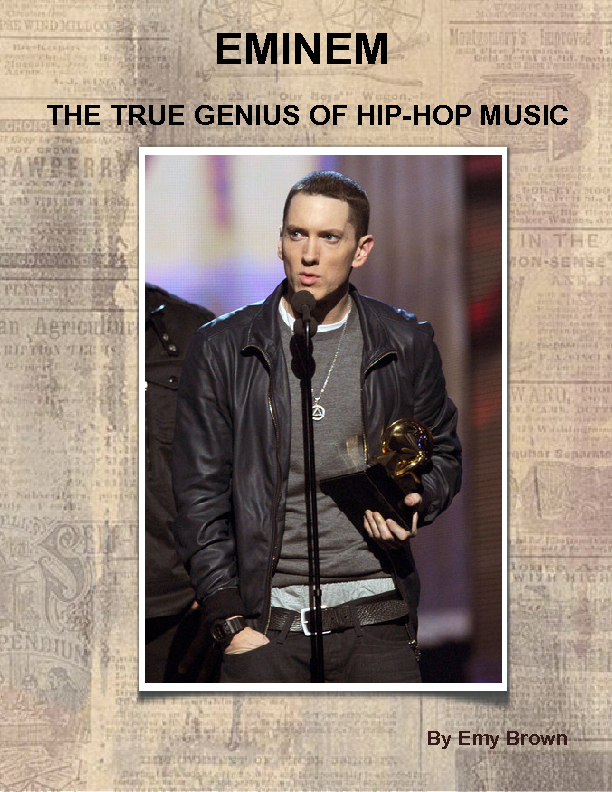 “Success is my only option, failure is not,” Eminem says in his Oscar winning hip-hop song “Lose Yourself.” Eminem is the most unique and controversial rap artist in the history of hip-hop music. He is also one of the most talented people in the world.

Eminem is a living rap legend, and his life story is fascinating in so many different ways. Some thought that he was destined to fail, but he was able to overcome all the obstacles and difficulties on his way to success. Eminem’s infinite strengths and inner powers helped him succeed in life. Eminem not only won his last rap battle in the movie 8 Mile, he also won the rap battle in the whole world. Eminem has become the best selling rapper of all time, and he has become an inspiration for millions of people around the world.

Through Eminem’s song lyrics and interviews and through amazing fan stories, the real side of Eminem is revealed. The stories behind Eminem’s most powerful, and sometimes shocking, song lyrics are discussed. The book comments on Eminem’s life before he was famous and when he became famous. It also comments on his battle with drug addiction. Eminem’s music is discussed from his first studio album Infinite to his seventh studio album Recovery. His successful project Bad Meets Evil is also discussed. Eminem’s haunting song lyrics and different rhyming techniques are analyzed, and some of the song lyrics inspired by Eminem are included. The movie 8 Mile is analyzed as well. If you appreciate good music, and if you enjoy reading success stories, this book is for you.

Emy Brown writes stories for adults, which are inspired by true events. Emy’s stories can help the reader better understand other people and the world around them. Emy enjoys writing and listening to inspirational music. She is the author of many books, including children’s books.