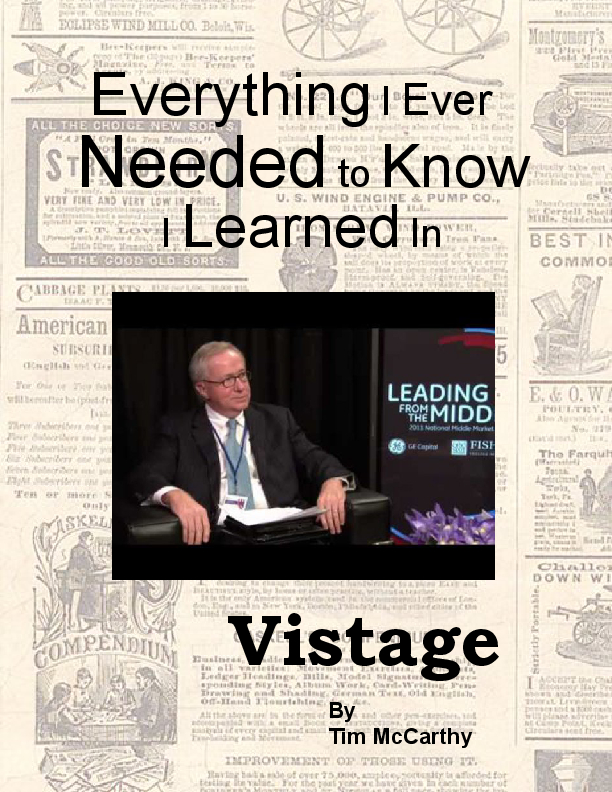 Everything I Ever Needed to Know I Learned In Vistage

On my December, 2013, retirement from Vistage I decided a nice gift to leave behind with my 17 dear friends was a recap of the most important things I learned from this wonderful experience. You'll find the best of the best from my notes, particularly from the early years. While attribution won't always be accurate, the themes I chose most certainly were from a Vistage speaker or peer and accurately reflect how I used the advice cited in my own successful businesses and in my life. These thoughts are to be shared freely in thanksgiving for all Vistage has meant to me and done for me. Final thought: I got a lot from Vistage partly because I gave a lot. I suggest to all new members to give first and the receiving will naturally follow. It's a very sturdy model. Peace.

McCarthy opened his first business in 1988. Over time, this company developed a million employer network delivering incentives for their national advertising clients such as Coca-Cola, Lenscrafters and McDonalds to 70 million USA employees. The company, WorkPlace Media www.workplacemedia.com, was sold to the Riverside Company in 2007 and then repurchased from Riverside in 2013.

In 2003, in partnership with his son, Tim Patrick, McCarthy opened the first chicken finger restaurant north of the Mason-Dixon line. Raising Cane’s of Ohio has now grown to 13 restaurants in central Ohio doing $32 million revenue in 2013. www.raisingcanesohio.com

Thank you for your interest in "Everything I Ever Needed to Know I Learned In Vistage". I am grateful.

My mission in life is to help others. I do this through funding and training organizations that serve others.

Thank you in advance for your purchase and support of organizations that serve those in need.