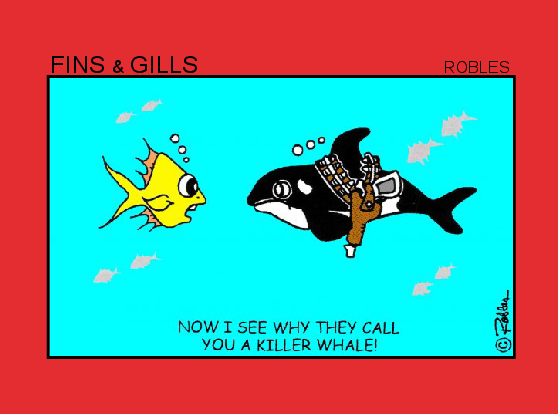 This book is a humorous collection of seventy single-frame cartoons depicting sea creatures that represent the variety of people we meet in various situations in every day life. The sole purpose of this collection is to put a smile on the reader's face, and perhaps remind them that the pitfalls in life should be met with an appreciation for irony, because just as things can go wrong in an instant, so can they get better just as quickly. It is hoped that these characters will be enjoyed by children as well as adults, and may inspire young artists to depict their world view in art as well.

Recognized for his talent as a child, Robles amused his friends with playful chalk drawings on the street. He would later be published in the: Sun Reporter, Home News, The Voice, Waterfront News, Mi Casa, Free Press, and Tropic Times, gaining the attention of Miami Herald's Pulitzer Prize winner, Jim Morin; Mad Magazine's Antonio Prohias, creator of “Spy vs. Spy;” and Pulitzer Prize winner, Don Wright of Miami News and Palm Beach Post, all of whom met with him and greatly encouraged him. He became a popular art show exhibitor for his zany football series in print and silk screen, “Half-Time Show.” Channel 10 Eyewitness News interviewed Robles at his home in Miami Lakes, Florida, and featured him on Sports Report. He won 1st Place in Graphic Arts at the Hialeah Grand Festival Showcase in 1990. “Fins & Gills” is his first published collection. A proud U.S. Army Veteran, Robles resides in Miramar with his wife, Angie, where they enjoy visits with their four children and ten..