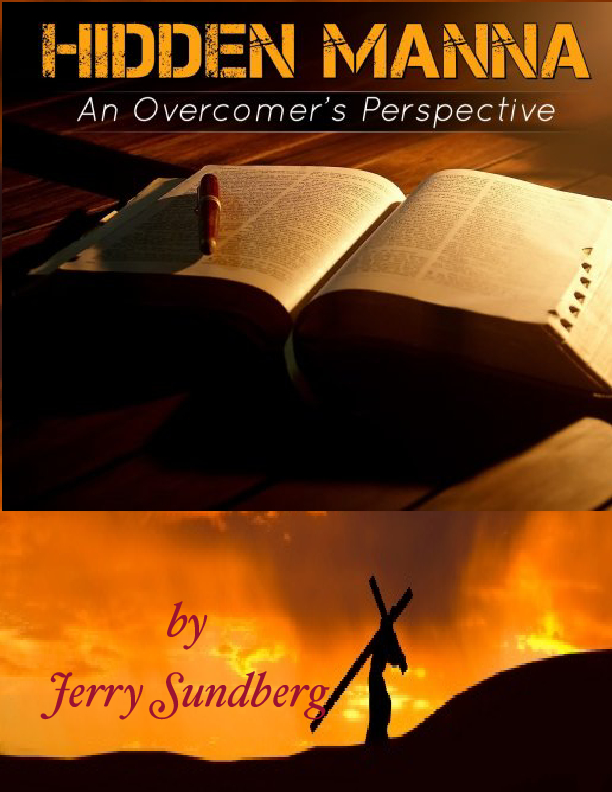 Revelations 2:17 states that to him who overcomes shall eat of the hidden manna. Proverbs 25:2 states that it is the Glory of God to conceal a thing and the Honor of kings to search them out.

This book contains a compilation of messages that reflect those hidden truths of God's Word as given from the perspective of an overcomer.

Included in this book are messages of exhortation, teaching, revelation, encouragement and prophetic messages and perspectives.

Jesus said, "You shall know the truth and the truth shall make you free." It is my express desire to freely give that which has been freely given to me. The scriptures also teach that the purpose of the five fold ministry is to prepare the body of Christ to grow into a mature man, with each member giving to the whole for the benefit and edification of all.

There are many books that are focused on this goal but there are not many books that will touch on many of the subjects addressed in these pages. You will find in the messages in this compilation, subjects that have had little or no attention given to them. It is not my intention to stir up controversy but, on the contrary, to reveal concerns expressed by Jesus and the word of God that seems to have been overlooked or simply ignored. I will not be pointing fingers to accuse but rather expressing a pressing need to follow that which has long ago been established in God's Word and the first century Apostles as well as correcting misconceptions being promoted in today's society.

There are some areas that will not be politically correct as the truth seldom concerns itself with this. Jesus encountered much opposition because the religious leaders of His day were more concerned with their own welfare than the state of the spiritual condition of their own people. Today, much of this remains the same. The focus of God's Word is to reveal Jesus and to reconcile the world back to God. This is and will remain the entire focus of this book. Many messages contained in this book are hard-hitting with no apologies offered or intended when the purpose of God needs to be heard.

I encourage everyone reading these messages to read them to completion, search out the scriptures to see if what is being proclaimed is true. The Holy Spirit will confirm all that comes from Him. We have only to ask. Jeremiah 33:3 says, "Call unto Me and I will answer you and show you great and mighty things you do not know." Let His word to you be the final word, for each man and each woman will give an account before the Judgment Seat of Christ and will not be able to defend themselves or their choices because of the unrighteous influences of another. Let each believer be convinced in their own mind of that truth as presented in God's Word.

I am a born again Christian, baptized in water unto forgiveness and baptized in the Spirit of God according to the fulfillment of the prophecy spoken in the book of Joel. Jesus also was said to baptize in Spirit and with Fire. In my walk with The Lord since 1976, I have endured that baptism of Fire which can also be represented by that same wilderness walk that the Holy Spirit drove Jesus into the wilderness for His testing. My own wilderness walk took me a little over 3 years. Since my earliest days as a believer, being drawn to Him through a tremendous hunger and desire for the truth, God has worked to teach me through Holy Spirit as was promised by Jesus. He has been my constant companion and friend. I could be seen by many in my early years, walking down the streets of Houston, Texas, seemingly talking to myself, when, in truth, I was in conversation with the Holy Spirit.

During these years, I have witnessed many miracles, healings, deliverances and have been used in the gifts and anointing of a prophet. It was because of the prophetic call in my life that brought many challenges as it seemed that the church at large was not ready to accept this ministry in their midst. Many visions and dreams have been given to me with most having already come to pass. There are still others given many years ago that are yet to be fulfilled but I have every confidence they will be. God has never failed me yet.

Due to my calling and anointing, I have been placed by God in the most precarious positions and awkward moments imaginable. I have not been a favorite of many leaders as God seems to have called me to speak those things deemed unpopular with them. When those words called for repentance of those areas of their lives kept hidden by them for years, let's just say that Christlike love was not what was returned, further revealing the state of their hearts.

I cried out to The Lord because of how He chose to use me, preferring to be used in giving a more positive message to His body and to His people individually. Although I have been used in this way, there remains much that God wishes to address in His body at large and to the leaders in particular.

As far as a formal education such as bible school or seminary, when I sought The Lord about this early on, His response to me was not what I expected. He said, "No one will teach you what I will teach you." He then confirmed this to me when Jesus said that another Comforter is coming who will lead and guide us into all truth. He will take what belongs to Jesus and give it to us and will not speak of Himself. Like Paul the Apostle, I have been taught by the Spirit of The Lord while His printed Word was used simply to confirm what He had taught me by revelation. This, I later realized, is His preferred method of teaching. Jesus said it Himself when He asked His disciples whether they would leave Him as did the multitude. Peter, speaking for the others, said, "Where else can we go. You alone have the words of eternal life and we know and are sure that You are the promised Messiah. You are the Son of God."

Jesus responded to this by showing that the gates of hell will not prevail against His church because His church will be founded on the very thing that enabled Peter to know that Jesus was God's Son and the promised Messiah. He stated, "Flesh and blood have not revealed this truth to you but My Father in heaven."

It is upon this rock of revelation knowledge that He continues to build His kingdom in the lives of all those who follow Him and obey His commandments.

This is the bedrock on which my life has been built up in Him and which He continues to speak and teach me according to all His Ways. This book and all it contains, speaks entirely of that which Holy Spirit has inspired me to write. It does not contradict the scripture neither is there any claim to the adding of a new canon of scripture within these pages. What is contained in this book are truths that have been walked in and in this way, it has become proven and known truth by this writer. It is with this confidence, not in myself but that which is borne from Him, that these pages are submitted to you for your edification, correction, instruction in righteousness and building up of your most holy faith.