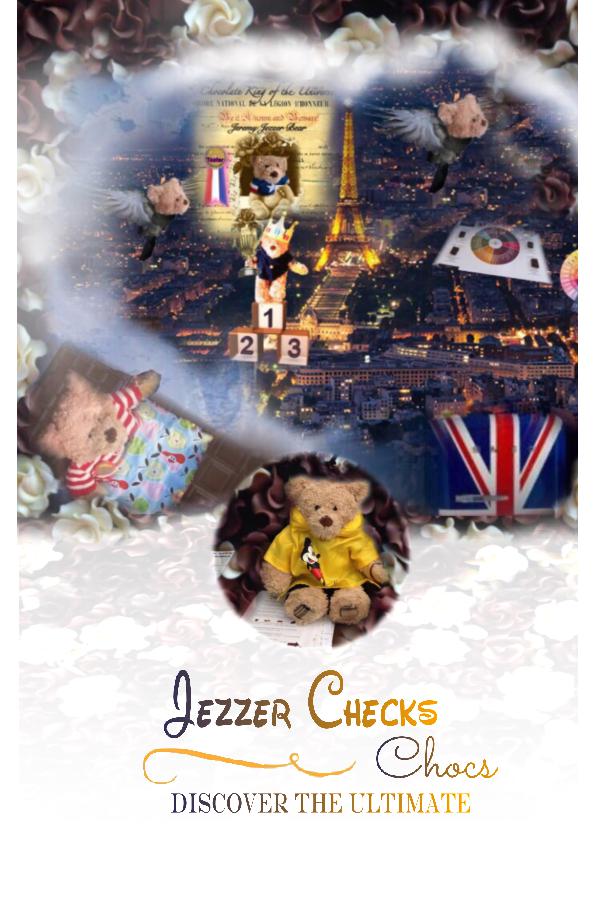 Jeremy Bear "Jezzer" has a passion for chocolate and adventure and along with Jezzydad goes in search of the world's finest chocolate. His friend, Honey Dog, a sensory expert has compiled this journal to help Jezzer and Jezzydad journal their chocolate tasting adventures with a sensory rating scale with key attributes and overall liking scores. In addition, there is an aroma wheel describing aromatic notes that have been associated with chocolate and the flavor of chocolate.

It is the hope that this journal will aid Jeremy Bear and Jezzydad in quantifying numeric liking scores for every chocolate they evaluate and continue to document on the blog, "JEZZER CHECKS CHOCS."

Jeremy Bear has already been crowned, "Chocolate KING of the UNIVERSE" by the elite Honorable Chocolate Taster's Legion which has led to numerous prestigious invites into the World of Chocolate competitions.

Good luck Jeremy "Jezzer" Bear on your quest for the best tasting chocolate.

Jeremy Bear and Honey Dog have formed a joint collaboration in creating the journal pages, but the entire task of filling in the journal with chocolate evaluations and ratings will be up to Jeremy Bear aka JEZZER and Jezzydad.

Jeremy Bear is a music loving, chocolate loving bear who resides in the UK with Jezzydad. Jezzer's is known to get into a bit of trouble every now and then with his Twitter pals during the ZombieSquad Saturday trainings where he is in charge of the jacuzzi. He is most famous for his blog, "Jezzer Checks Chocs." He continues to consume chocolate on a daily basis.

Captain Honey Dog, former chief taste tester for "The HoneyDog Company, Inc." now flies Angel Missions with #TheAviators #Angels on Twitter as she circles the Jet Stream, buried off the summit of K2, the world's second tallest mountain by her friend, Garrett Madison, the 16th American to summit K2 on July 27, 2014. Honey's spirit and her mama, Natalie, reside in Los Angeles, CA

Messages from the author:
More Books by HDK