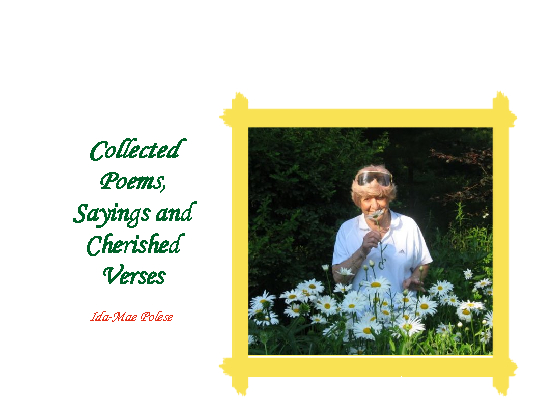 These are poems I have written, and some favorite ones by other authors I love.

Ida G. Polese was born April 17, 1918 in Lynn, Massachusetts. She was born to a family of nine children; Four older brothers: Simon, Bartholomew, Charles and John, two older sisters: Aurora, Adelaide, and two younger sisters: Lisa and Frachesca. Each of the girls were named symbolically: Aurora for the coming of the dawn (finally, a girl after four boys!), Adelaide after Adelina Pati a famous Italian opera singer, Ida after the opera Aida; Lisa, ater the Mona Lisa; and Francesca, after her father's mother. The girls also had nicknames: Ida's was Sasantusa "little saint", because she was so shy. Perhaps she put her thoughts into poems, instead of speaking. She wrote her first poem, The Hobo, at age 9.