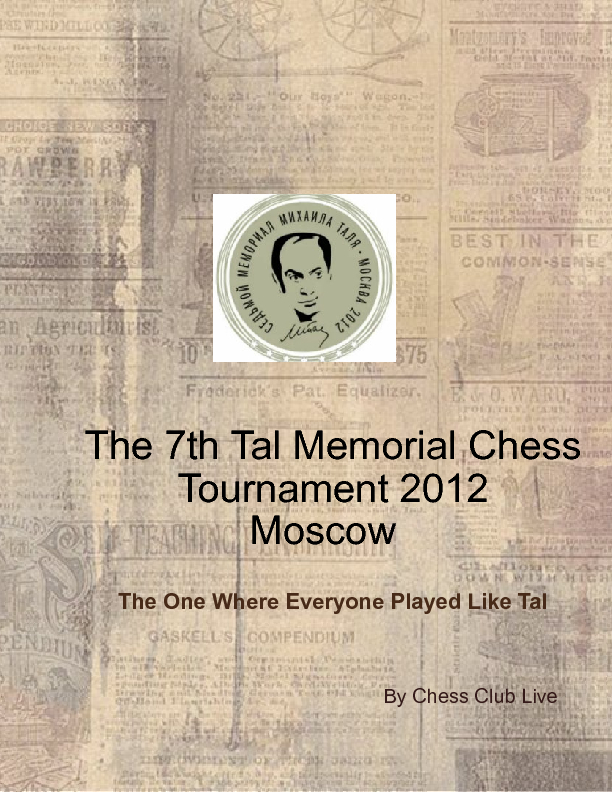 Tal Memorial 2012 Chess Tournament, Moscow - The One Where Everyone Played Like Tal

The 7th edition of the annual Tal Memorial 2012 chess tournament was like none ever before with the players highly combative. Even after the penultimate round half the field had a chance to get a share of first prize.
From the start proceedings were shockingly brutal and violent and by half way most of the tournaments favourites were languishing at the tail end of the tournament standings.The incredible series of sacrifices ensued in games each round by almost every player in the tournament. Pawn sacs, Bishop sacs, Rook sacs. Passive and active, defensive, attacking, tactical, and positional sacrifices. Each showcasing the attacking flair which seemed reminiscent of the great man himself, Mikhail Tal, Master of the Sacrifice.This book and the games in it represent a 21st century attacking chess manual. We have signposted the sacrifices with warning signs for those of you with sensitive disposition.A truely memorable tournament and with an amazing average elo of 2776.
Low Res images.

Chess Club Live is a chess community and aims to bring chess front and center as a discussion to engage and share in. We aim to instill this sprit of sharing and conversation about chess by providing innovative products and platforms which assist and foster a chess community.