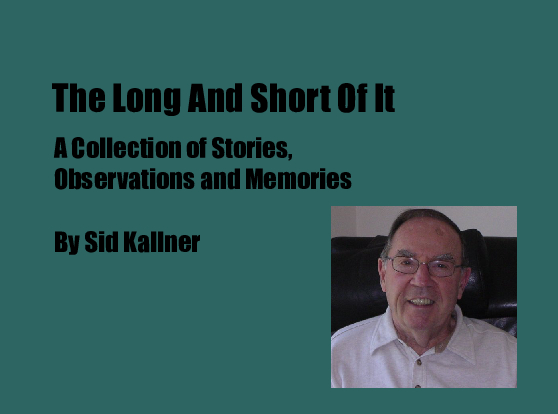 The Long And Short Of It

A compliation of Sid Kallner's life and times

Born on February 23rd, 1930 (although for many, many years his family celebated this birthday on February 22nd) Sidney Kallner (whose real name is Kollner which wasn't officially changed to Kallner until the 1990's)

was born in the Bronx, New York to Max and Dora Kollner. As the middle child between older sister Roslyn and younger sister, Phyllis, Sid in short order, grew up, became a NY Giants baseball and football fan, attended City College of New York, graduated and was shortly thereafter sent to the Korean War.

Upon his return he met, and married, Esther Kallner in 1955. The young couple had two children, Jeff and Bruce and they are the grandparents of three boys, Alex, Brian and Aaron.

Following a successful career as an advertising executive Sid and Esther retired to New Jersey and Boynton Beach, Florida.