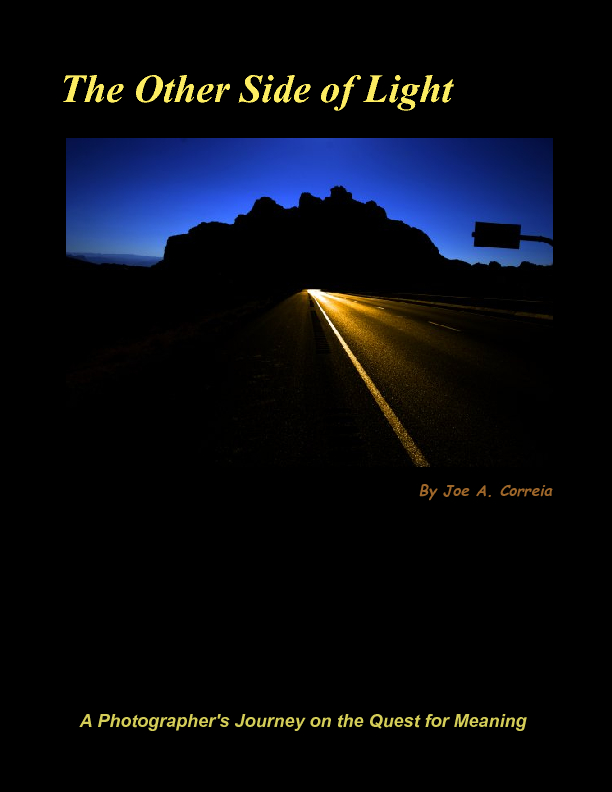 In Art and Fear by David Bales and Ted Orland, a quote credited to Stephen Detailer reads, “Artists don’t get down to work until the pain of working is exceeded by the pain of not working.”

This has happened to me. The pain of not writing has finally exceeded the pain of writing. Here I am at three in the morning making progress in the alleviation of pain. With the advent of electronics and supporting technology, I have mustered the courage to produce my first book.

The title, The Other Side of Light, is a gift from life to me. As a photographer, I depend on light. The word photographer means light-writer. The very core of my dwelling as an artist takes place inside of my mind where no light exists. Heart and intuition, which play a vital role in my work, also operate independently from light.

Photography, a physical art form often requiring expensive and complex equipment to capture, process, and eventually print an image, is hardly anything more than a vehicle of communication to transport a thought or feeling from the consciousness of one individual to another.

This book, therefore, is about what is happening on the other side of the vehicle of transmission and all that is involved in this complex process. Love, pain, joy, wonder, humor, and even abstraction are the hidden intents behind the images and words.

Whether read from the beginning to the end, from back-to-front, or at random, these reflections offer you the opportunity to take a peek at where I have been, who I am, and what gifts I hold to share.

Joe Correia was drawing before he could write. His life has been a journey into the human heart which expresses through his photography, film, and teaching. Exposed to several cultures and languages, by the time he graduated from college with a fine arts degree and minor in business he already created prize awarding art, being awarded several commercial jobs, and developed leadership skills in performing, directing, inspiring, others to follow their ambitions.

Since his arrival in the United States , Joe had performed well in various capacities. As a photojournalist his portfolio includes President Regan, President Clinton, Pope John Paul II, Jim Rodenberry, Connie Francis, James Earl Joans, James Wheatmore, Tippi Edrin, Billy D. Williams, David Brown, Chief Little Horse (last living descendent of Geronimo) and Ken Burns. He won various awards (national and international inter-arms) while in the US Army as a combat photographer. (His winning award work was on show at the Smithsonian for six months during the “Military Photography Around the World Show in 1982”

As a college educator he has developed curriculum and expended the department of Photojournalism at three different universities:

Joe is presently one of the national presenters for the Arkansas ESL Academy helping teachers (k-12) and school principals to incorporate and develop digital technology projects in ESL active classroom environments.

As an independent video producer he developed full training and educational video programming for various major US corporations such as: General Dynamics, Atlantic Research Corporation, NASA, AMFUEL, and LTV. Joe has directed and produced over thirty live field multi-camera video productions, from coast to coast for audiences varying from 2 to 5k attendants. He also has directed and produced several commercial documentaries. The most recent video work was a co production and assistant direction for CTN's From Vision to Reality,. Joe’s broad understanding of the media, his love for science, education, and people makes him an ideal vehicle of creative tools to inspire, educate, and promote the value of science in education.