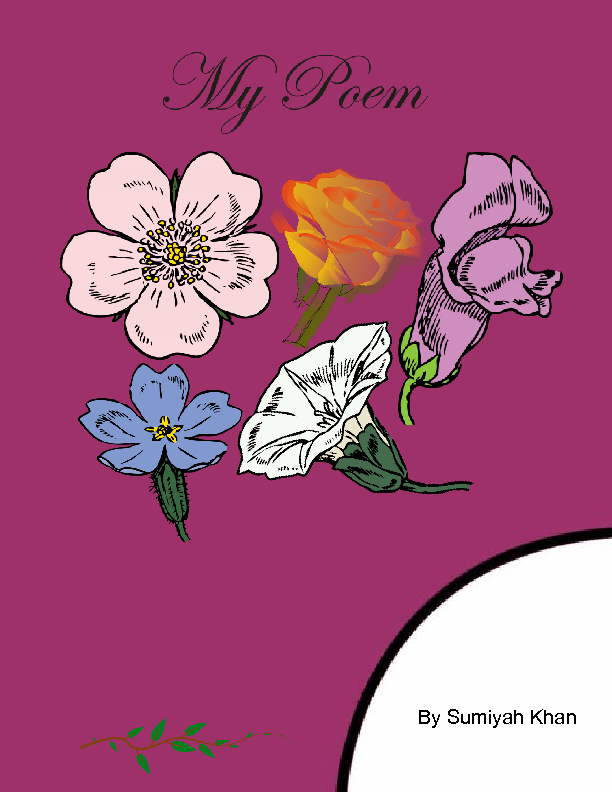 Touch the heart - Poems for you

A poetry book with a mixture of poems.

This young poets name is Sumiyah Khan, she is 15 years old, who is from England and lives in Yorkshire. She has three sister’s two brothers, and a wonderful mother and father, who support her very much, when it comes to her poetry world.

Sumiyah Khan is a caring young girl who has the ability and focused strength, to write such amazing poems. She has written many poems, and we believe her poetry genius was unleashed, when she was about 12 years old. This young poet has published poems that leave readers in a feeling of wonder; her poems create such effect on the readers as well as other poets on poemhunter. Sumiyah Khan seems like an intelligent young writer who has the courage to succeed in poetry, as our known poets and admin observed further into her poems, we came to realize that a majority of the comments Sumiyah gets on her poems, famous poets across the globe gain such comments. She presents poems in a very elegant structure, which capture lots of attention.

It has been noticed my many poets on poemhunter, that Sumiyah Khan's poem's consist of language and sympathy that famous poets across the world present. A young poet like Sumiyah Khan can achieve more than expected in life, she can make herself proud as well as the outside world. Famous poets across the world have stated that, 'Sumiyah Khan presents her work very elegantly, while revealing it sophisticatedly'. This amazing poet has been noticed my many famous poets across England, due to the fact, she writes poetry creating empathy, not towards herself but to people that go through torture everyday, such as, children who get abused everyday, and alcoholics that ruin their life.

We have faith that in the further two years Sumiyah Khan can be known as one of Britain’s youngest poet’s if is she keeps up her ability in writing poetry. Nevertheless, Sumiyah Khan seems like an independent young writer who can definitely succeed in the poetry world.