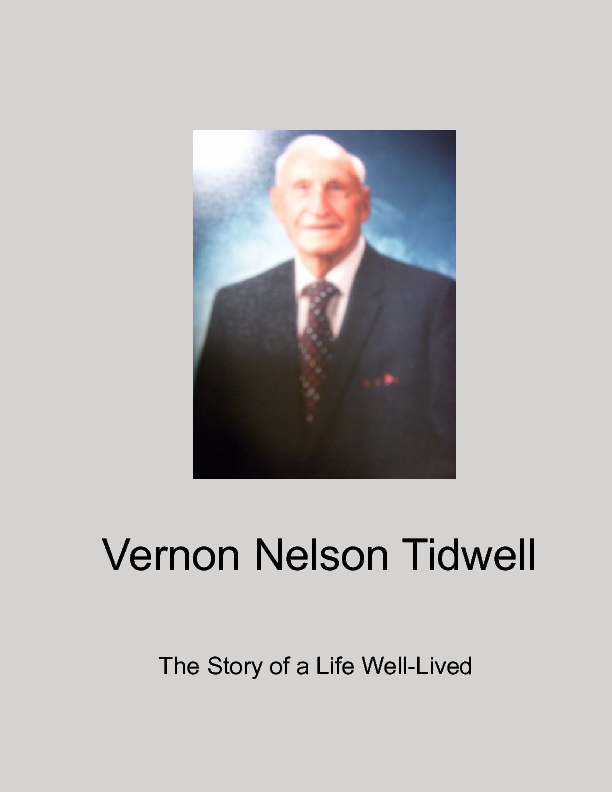 This life story of Vernon Tidwell began with a tape-recorded interview done with him by his granddaughter, Pam Campbell Su’a in June of 1983 in Ogden, Utah. After the interview was transcribed and returned to him for correction, he subsequently made two more tapes in his home in Smithfield, Utah during November and December or 1983 and sent them to me in Laie, Hawaii. He added several incidents and more details of his life. His story is told in his own words and I’ve tried to transcribe it keeping as close to Grandpa’s actual words as possible so that his narrative style is retained.

As you read it, sit back and read as if you were listening to him talk. He had a great life, and enjoyed reminiscing about his early years. He loved his family most of all. At the end of his story, his living grandchildren have recorded several of their favorite memories of him. Each of us had so many great memories of him we couldn’t decide which one to write (and because Pam typed this, she got two memories). One theme running through all our memories was that of Grandpa always being there for us at important times—and the every-day times--in our lives and that he loved us all unconditionally. He and Grandma Celia gave us a great heritage. He was an honest, honorable, loving man. We all have a lot to live up to.—Pam Su’a

Pam Campbell Su'a is the daughter of BarDee Tidwell Campbell and Arthur Farr Campbell and granddaughter of Vernon and Celia Tidwell. She currently resides in West Jordan, Utah. She is married to Vatau (Rocky) Su'a. She has 4 children--Jenilyn, Jamie, Manti (Rachel) and Mikey (Nita) and two grandchildren--Laki and Leila.