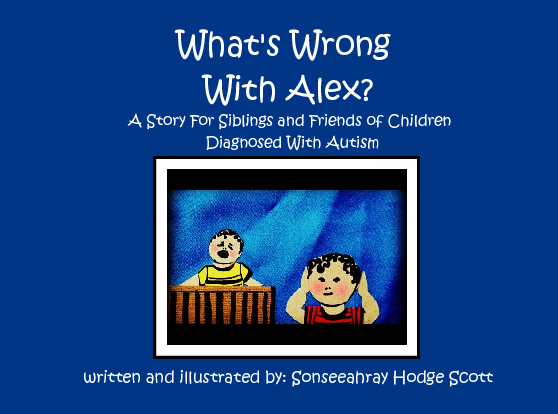 Johnny can't wait for his little brother to come home so he can play with him. But soon things start not going according to his plan as his little brother, Alex is not meeting his childhood milestones. "What's wrong with Alex?" helps explain to young children what Autism is like in a language they understand.

Sonseeahray Hodge Scott is a stay home mother and jewelry designer. She has a B.A. in Theatre with a vocal performance minor. After college, she began working in theatre and taught some children's theatre. Right before she had her first child, she began designing jewelry. She eventually opened her own accessory business, Embellishment Queen. Her line is carried at the Repertory Theatre of St. Louis Gift Shop and online at sonseeahray.etsy.com. After her youngest son was diagnosed with Autistic Spectrum Disorder in 2010, she began writing poetry in her spare time about the experiences she had with her two sons, in particular her experiences with dealing with a child on the spectrum. Her blog, named "Adventures Of Me And Da Boys", with her poetry can be found online at adventuresofmeanddaboys.blogspot.com