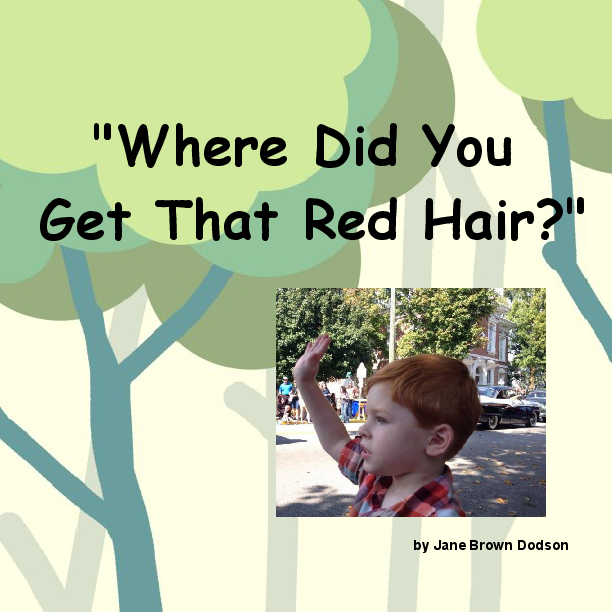 "Where Did You Get That Red Hair?"

This book was written for my 4 year old grandson who has read hair. Everywhere he goes people ask him "Where Did You Get That Red Hair?"

Jane Brown Dodson was born to George Franklin and Lucille Turner Brown on October 25, 1950 in Russellville, KY. She graduated from Russellville High School in 1968 and Western Kentucky University in 1972. After graduation she married her high school sweetheart, James Carlisle Dodson, and moved to New Orleans, LA where Jim attended Tulane University School of Medicine and Jane taught Home Economics at L.W. Higgins High School, Marrero, LA. In 1977 the couple moved to Louisville, KY where Jim completed his medical training. Geroge Victor Dodson was born in Louisville on May 8, 1978. The family moved back to their hometown in July of 1979 where Jim began practicing Internal Medicine. Their second child, Julia Elizabeth, was born on May 8, 1981. The couple divorced in 1987 and Jane went back to teaching for the Muhlenberg County School System, where she is presently employed as a Family and Consumer Science instructor.