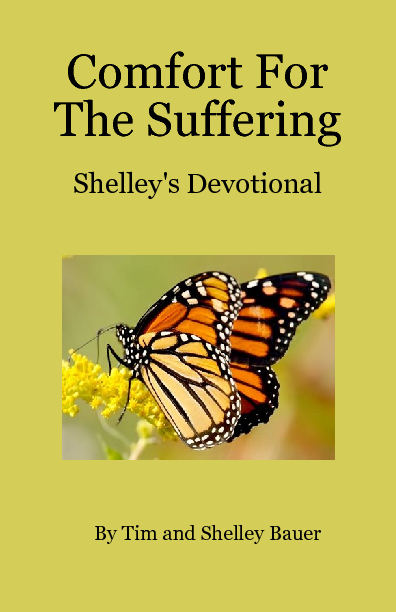 Comfort For The Suffering - Shelley's Devotional

On January 19, 2004, my wife, Shelley, experienced a major stroke at the age of 44. Hastily gathered within a small hospital meeting room, I remember the looks on everyone’s faces within our family as the neurosurgeon shared with us her dire circumstance. If they didn’t quickly stop the swelling from the trapped fluids within her ever-expanding brain, she would surely die.

Right before he performed an emergency craniotomy, he bluntly informed us that he would like to try and save her life because she was so young, if I wanted him to, but he believed that she was already too far gone.

By the mercy of God, her life would be miraculously spared. About two months after her stroke, Shelley, began to write in a daily devotional. Contained within this book are some of her personal struggles with all of the physical and emotional highs and lows. I know what I felt as I read her scribbled entries. She was learning to write again, causing the handwriting to be somewhat shaky.

They deeply touched me as I felt her heart and innermost feelings during the early part of her recovery. It is a very personal part of her story that I believe will bless anyone who takes the time to read and meditate on the priceless nuggets, especially those who are going through a similar state of suffering.

Through the sharing of Shelley’s heart we also pray that the Lord will comfort and encourage those with heavy hearts, struggling with an overwhelming sense of despair and discouragement. The dark clouds of hopelessness can mercifully be removed in the light and love of Jesus Christ’s embrace. He specializes in bringing order out of seeming chaos. Praise the name of the Lord!

My wife, Shelley, and I have five children and have been married for 30 years. On January 19, 2004, she experienced a major stroke at the age of 44 that almost claimed her life. This dramatic experience changed our lives forever, setting the course for a "higher" calling.

A couple of months later, after receiving an ultimatum from my employer to commit long term or be indefinitely laid off, I left my job as a tool designer. In my heart I knew that the Lord was calling me to come work full time for Him.

We have been entrusted with a "trumpet-like" ministry to awaken the sleeping Bride in America. We must prepare our hearts to meet our Heavenly Bridegroom. The power of God that resurrected my bride is a sign of the power of God that will also resurrect His Bride. Though she appears in our nation to be almost dead, like Shelley was, she too will be revived through the difficult circumstances that are soon coming upon her.

The days ahead for our nation, as well as the entire world, are going to be extremely difficult. They will be used to expose the true condition of our hearts. Their purpose is to purify and prepare the chosen Bride of Christ. Our prayer is that the revelation of His truth in this time would be used to stir you up with a fresh determination to submit to the Holy Spirit's leading in your life, and to walk in holiness and purity in preparation to meet the Lord.

We must get ready to go behind the veil where no flesh will glory in His presence. Praise the Lord for the great things He is accomplishing in our day for His name's sake.