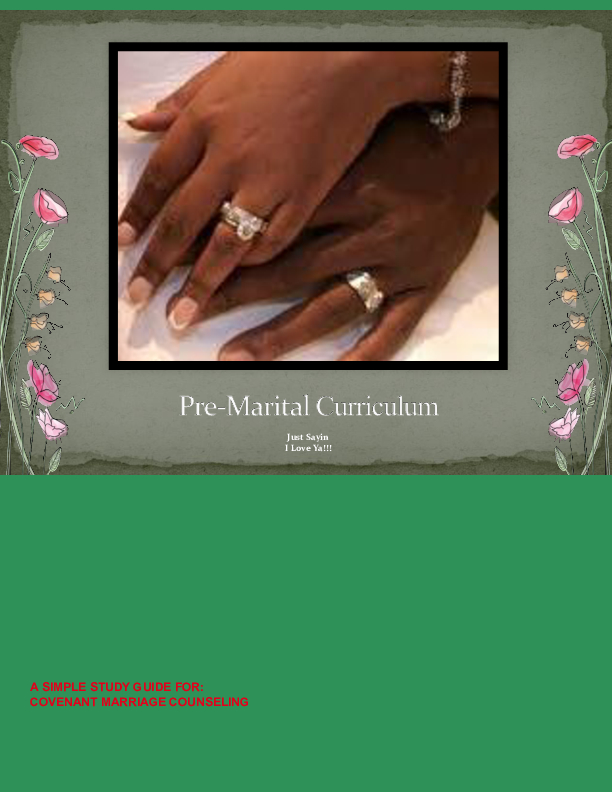 This course is designed to enhance the Matrimony of couples and to inform those whom have elected this as a pre-marital course. The

marital covenant relationship is a process in which couples grow into by enhancing their understanding on God’s covenant with humanity.

Therefore; this course makes references to God’s covenant often in teaching, as well as discipleship training. The goal is to give individuals’ God’s

purpose for humanity, in which they will in turn find their purpose in serving God, regardless of what situation they find themselves involved in.

My personal philosophy is that marriage is the most sacred union that individuals can engage in. I believe that God designed marriage as a

covenant between a man and women in accordance to his Holy Word, Zondervan 1987,

Genesis 2:24: Therefore a man shall leave his father and his mother and shall become united and cleave to his wife, and they shall become one

Command Sergeant Major Randy Cowan retired from the Army on 1 Jan 2016 after serving his country for 37 plus years. He has a passion for developing young men into Godly men of honor, respect, and dignity, as they become gentlemen. CSM Cowan has divested his military and life experiences into young men for many years now, to accomplish a goal that far exceeds himself, to see others grow into their God given purpose on this earth, for this time, into eternity. He is now known by others as Mr. Randy.

Mr. Randy is a graduate of Thomas Edison University Trenton, New Jersey where he earned his Associate and Bachelor of Science degree in Homeland Security and Emergency Preparedness. CSM Cowan has also completed Master Degree in Theology, and a Master Life Coach Counseling degree both at Liberty University. CSM Cowan’s military education includes the highest level of training with numerous awards.